Lexia: What's up pet people? My name's Lexia. Welcome back to my channel. For today's video, it's going to be a continuation of last week's video, and that's going to be decorating the custom cages vision enclosure that I got and unboxed in last week's video. Basically, what we're going to be doing is we're going to be putting together everything that needs to go into the enclosure and decorating it to be suitable for a ball python. The ball python that is going into the video, I will show at the end. It's just going to be a fun little How to Set Up Ball Python Enclosure/Continuation of Custom Cages Enclosure Review Video. If you're interested in that, please keep watching.

All right guys. Getting right into the video. As you can see, I am opening the enclosure doors. I have already put a UVB bulb on top for Monty. UVB bulbs are not required for ball pythons as they are a lot of other snakes. They're not required for a lot of other snakes, but extra UVB you will not hurt your snake. Looking at the video, you can clearly see that the doors opened very smoothly, everything's going well, and I'm going to start off by putting a cypress mulch in the enclosure.

I do also have this mulch and the enclosure below which is the milk snake enclosure and that's like I said again because holding humidity where I live is incredibly hard. Cypress mulch does hold humidity really well and it doesn't mold, which is one of the main reasons I'm using it right now. It does also dry out though so you can mist it back down to bump humidity if needed. It will never be as wet or as thoroughly dampened as it is whenever you first get it out of the bag though. That is one thing you need to take in consideration.

Anywho, cypress mulch, as you can see, I'm putting the entire 24 dry quart bag into the enclosure. I'm just spreading it out with my hands which in hindsight, I didn't think through because I am allergic to cypress. Normally I wear gloves, I just decided not to because I was lazy, but it is what it is. Anywho, I am spreading out the entire 24 dry quart cypress mulch bag in the enclosure, and as I said it's pretty moist right now so you don't really need to do anything else.

Once I have that spread out, I am going to add in a little bit of sphagnum moss. I do that on the side where I'm going to put the hide or hides. Currently, in this enclosure, I'm only going to have one hide. I have another one on the way ordered. It is best to have a hide on both the cooler and the warmer side. Wherever you have the heat mat, which is where I'm placing the hide right now. Wherever you have the heat mat is where you need to have one hide. Then on the cooler [unintelligible 00:03:46], you need to have another hide.

That being said, I have half of the hide on the heat mat and half of it not on the heat mat. She can still choose where she lays in the hide, but I put this sphagnum moss under where the hide is, and I mist that down a little bit just to give an extra little bit of humidity in there to help her with shedding and whatnot. In a video about Monty, the ball python, going into the enclosure, you will see what I mean when I say she has some problems with shedding. Currently, she's having no problems with shedding which I'm super proud of, but I want to keep it that way.

Ball pythons require nothing below 50% humidity honestly, but 55% to 60% range of humidity is perfect for ball pythons, and because of where I live, that is incredibly hard to achieve as I've said multiple times now. I just do anything to bump her humidity a little to keep it at that range. Anyway, moving on from that, you can see I take a minute to go over to a box in the corner of my room where I have a ton of plastic plants. I'm just going through those and I'm going to arrange them in the enclosure.

A lot of people wonder why I put plastic plants with snakes and things like that, and by a lot of people I mean some of my friends and whatnot, but it's because snakes need enrichment and enrichment is anything from logs, to plants, to sticks they can climb over, or sticks you can hang from the top or a little netting or anything that will cause the snake to have to roam around it or just move around it. I have to figure things out enrichment to make sure your snake isn't lazy, doesn't become obese, and just gives them something else to do than sit in a hide all day or sit and look at a blank enclosure, plus it's just more visually appealing, in my opinion, to add some greenery into all of your enclosures.

As you can see, I have my hide on the side. Like I said, the heat mat's halfway under it so she can get warmer or colder, and because it's a heat mat, it radiates out throughout the soil and whatnot, and to have a basking bulb where it points at one specific spot. She can decide herself if she's too warm or too cold. One thing about the sphagnum moss that I forgot to mention in the cypress mulch is that you don't want it to be too wet and you don't want them to sit in one place for an extended amount of time due to the fact that it can cause scale rot if they just sit in a damp part of the enclosure the entire time and don't move. It can cause problems.

That's another reason that it's good to let that humidity drop a little and rotate out the substrate, move it around, make sure that it's not all just wet in one area, mix it together. Anyway, as you can see, I also have a pretty large water dish. Now, I have a larger water dish that I ordered from Custom Cages, but due to the fact that I want to put another hide in here, I'm going to stick with the corner water dish for now.

I might do the bigger decorative water dish from Custom Cages. I had it at my milk snake enclosure for a while, but for the time being, I'm just going to keep my little corner dish because she seems to like that. I've seen her go over and drink it quite a couple of few times. Quite a few times. [chuckles] That's what I did. The finished product, as you can see, it looks really good in my opinion. It has everything a ball python needs, it has a heat mat, has a low humidity monitor I have taped into the upper side of it so I can track humidity. I've had it decorated for a week. So far, the humidity has not dropped below 50% which I think is amazing.

Vision enclosures hold humidity beautifully as I've said many times before, but this just goes to prove that fact further. It's great for where I live and just everything, all the outside factors that could affect her humidity, heat, all that stuff. It's holding great. I absolutely love that. As you can see, there's her finished enclosure. I didn't go into depth on how to put together a ball python enclosure, but these are all the things you need for a ball python to succeed.

As you can see, the enclosure is done. She's in it, she's been in it for the past week, she's doing really well. Super proud of her. I fed her yesterday. The fact that she was able to eat in her new enclosure gives me so much hope because ball pythons are really picky eaters, and it just means she's comfortable and doing well in her a new environment. There's how to decorate the enclosure. You saw everything I put together in it. I went through the steps with you. It wasn't a whole lot, it wasn't an in-depth how-to video per se, but it does give a idea of what you need for a ball python enclosure.

Furthermore, it went to explain how well the humidity holds for these enclosures. As I said before in the last video and a couple of times in this video, vision enclosures are absolutely amazing when it comes to holding humidity and just retaining the temperature of the enclosure. It's great for viewing. I love these enclosures. I'm thankful for Custom Cages you all. It is a great, great piece of-- Not equipment, I keep saying equipment. It's a great tank to have.

If you want all those answers, go watch the videos. I'm not going to spoil it, but the answer is, yes they do. Anyway, [chuckles] I hope you all had a great time watching today's video, and like I said, stay tuned for next week's video. If you liked what you saw, please give a big thumbs up, and if you did it, like I said, in the last couple of videos, you've already watched it all the way through. Go ahead and give it a thumbs up. Anyway, subscribe if you haven't, stay tuned for next week. Thank you guys for watching. Bye.

"My name is Lexia. I have lots of pets and a passion to educate others about all of them! I cannot wait to share my videos on animal care, pet enclosures, toy DIY's, and how to make the overall quality of life for your pet better!"

Lexia is the proud owner of a number of reptiles, including her ball python, Western Hognose, milk snake, crested gecko, and more. Stop by her channel to get great information on which snakes are the best choices for a beginner, and her Custom Cage unboxings and enclosure reviews! 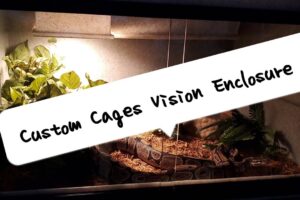