ATTENTION!
Handling venomous/poisonous animals is dangerous and should only be performed by licensed professionals.

Owning venomous snakes, reptiles, etc. might not be legal in your State/County/City. Please contact your local DNR for more information.

Speaker: What's up guys. I'm here in my snake room. I'm going to try this YouTube thing out because everybody is doing it but today I got to clean some snakes. I'm going to show you guys first-hand what I do with my snakes in order to clean them. I also have to set up a cage or two because I got some new cages. I got to install lights. It's going to be really fun so hopefully you guys enjoy it.

Now that I got the light installed, I started running the wire. I had to cut the end of it off to fit it through the small hole in the back which I will actually put together later on. I will show you guys the whole process, like I said. I actually started siliconing the wire to the top of the cage. Now, the reason why I do this is so that snake cannot pull the wire down because that would be very bad and ruin the lights. Actually, I use aquarium safe silicone to silicone the wire all the way across the top and out the back of the cage. Again, very long process, not going to show you guys the whole thing but I'll show you guys what it looks like when it's done.

There you go, nice new cage, ready for a snake. Now, I'm going to be moving my western diamondback rattlesnake in here because the cage he is now, well, it just doesn't match. So, I'm going to be taking him out of here putting him in here. Again, there's the wire. You can't even see it's up there normally. I'm going to go ahead and move him, get him all set up. I'm going to show you guys that process.

Guys, here is the final. Now, it is still wet. It'll look a lot different once it is dry. It'll look a lot better. The color of the bedding itself which is egret actually is this color when it's nice and dry, which again, it will dry out. He is a desert snake so I do not want it too wet in there but he'll be fine in there for a couple of days. Now the fun part, putting the glass in, putting the lock on the cage and, yes, giving him a water hole and putting him in.

Now the fun part, I get to take him out of his enclosure now and put him in the new enclosure. I'm getting rid of that cage. That cage I have is an extra just in case I don't have enough cages but I just happened to come across a bunch of really good vision cages, so I'm going to move him over now. Hopefully nothing bad happens. Now this snake is very, very friendly. Most western diamondbacks are but this dude particularly I've had for about three years now. He actually came from a very good friend of mine out in homestead. He's a big beautiful male.

Welcome to your new home buddy. All right. Now that he is in, let's get to cleaning some stuff. Now I got to clean some cobra cages and it is breeding season for cobras right now particularly, Monocled cobras. I do you have a breeding pair. They are Albinos. They literally are above each other. There's one here. This is the male, this is the female but I do have to clean both their cages. I'm going to take them both out, put them in this trash can and then put them back in the same cage together. I'm going to take the male out first clean his cage and then I can put him back in it. Then put the female in within her or with him, excuse me, as I clean her cage. Let's do that.

A bit messy. Likes to push against the glass, pushes on the bedding back, all that fun stuff. So, get to cleaning that then put her back. Cage is all clean, bedding is redone, glass is nice and clean now too. I actually gave him a bigger hide so they can both fit in there comfortably and added about a gallon of water to the bedding. Now the reason why I did this is because what stimulates mating for male Monocled cobras is very simply humidity. I added humidity to the cage so he wants to breed a little easier.

Now, for females, that girl right there is actually chilling him down for a little bit and that's what stimulates her. I'm going to go ahead and put the male back in his enclosure and then take her out and put her in there as well. Now, right now they don't really care too much for each other but they will tonight, hopefully. Hopefully, I get some pretty babies out of this.

So, that's it for my episode today. Hopefully you guys enjoy it. If you do, hit subscribe. I will be trying to post videos at least once a week so you guys can see what it's like having all these animals and also working with some of the animals I do. If you guys do love Chandler's Wild Life, I definitely suggest you watch my show because there's going to be a lot of behind the scene stuff in here that he probably won't post but I will and I don't care, so it'll be great.

Hopefully, you guys like it. Again, subscribe, like, share, tell everybody that I started a YouTube channel. Again, have a great day but be safe out there guys. Don't do the stuff you see us doing because we are trained. We are professionals. We've been doing it a very very long time. See you guys next time.

Will Nace's YouTube channel showcases his snake room. He has purchased a number of Vision cages from CustomCages.com, for his rattlesnakes, vipers, cobras, and many other species of snake.

In addition, many other types of animals are featured on the channel, from reptiles (particularly alligators), to sharks, to mammals.

Connect with Will Nace 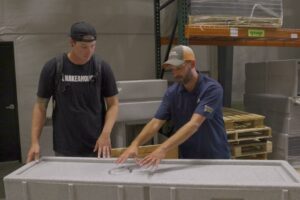 HOW IT’S MADE – Vison Cages! 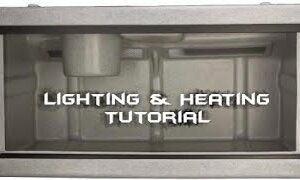 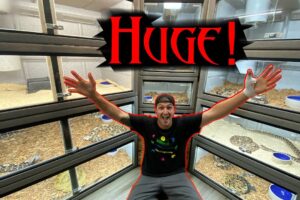 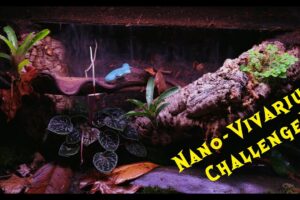